Joe Biden has told Vladimir Putin to stand down in Ukraine as the two leaders shared a phone call today amid a massive build-up of Russian troops on the border.

The US President, facing his first major foreign policy test against an experienced foe, ‘voiced concerns over the sudden Russian military build-up in occupied Crimea and on Ukraine’s borders, and called on Russia to de-escalate tensions’, the White House said.

Biden spoke of his ‘unwavering commitment to Ukraine’s sovereignty and territorial integrity’ and proposed a summit ‘in the coming months’, the White House said, without giving any indication of Putin’s response.

Moscow later added that the phone call had taken place at Washington’s request, making it appear that Biden had come crawling to his adversary.

It took place hours after Russia’s deputy foreign minister warned Washington to keep its warships away from the Black Sea ‘for their own good’ while accusing the US and NATO of turning the region into a ‘powder keg’.

Sergei Ryabkov said the decision to deploy two ships to the Black Sea is ‘a provocation’ designed ‘to test our nerves’ as he called the US ‘an adversary’, ramping up a war of words between the two nuclear-armed superpowers.

The USS Donald Cook and USS Roosevelt, two Arleigh Burke-class destroyers, are thought to be on their way to the Black Sea from a naval base in Spain and due to arrive tomorrow and Thursday, according to Turkish sources which are responsible for policing the straits leading to the sea.

President Putin has spent the last week building up forces along Ukraine’s border – where there are now thought to be some 83,000 troops – presenting Joe Biden with the first major foreign policy test of his presidency.

While Putin has given no official reason for the build-up, observers believe the move may be in response to a tough line that Biden has taken with Moscow, including referring to Putin as ‘a killer’ while vowing ‘consequences’ for attempts to interfere in US elections.

Michael McFaul, former US ambassador to Moscow who was in post when Russia annexed Crimea in 2014, said this week that Putin appears to be sizing up his counterpart including how he responds to military threats. 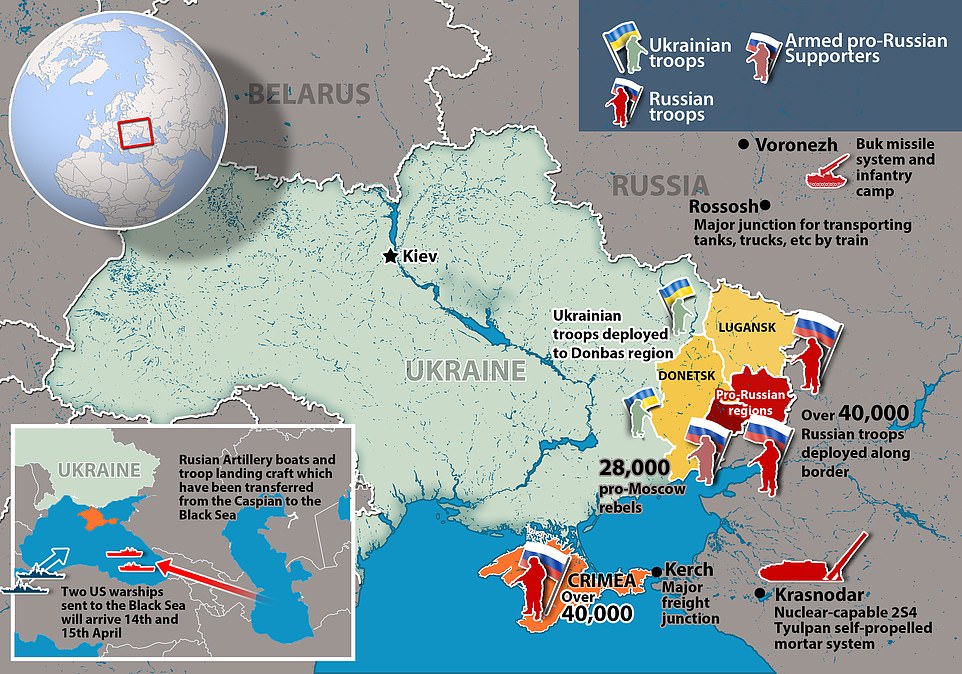 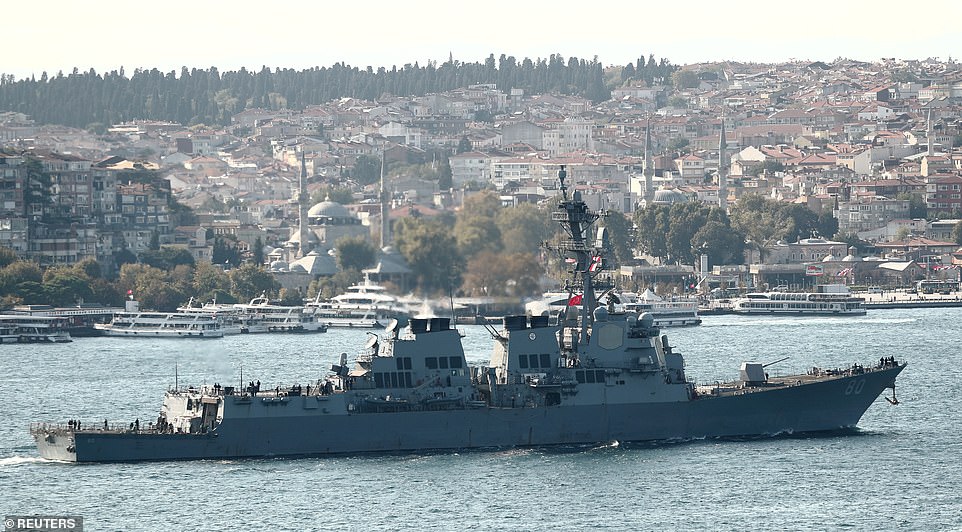 The USS Roosevelt, an Arleigh Burke-class destroyer, is thought to be one of two warships en route to the Black Sea as a deterrent to Russia (file image) 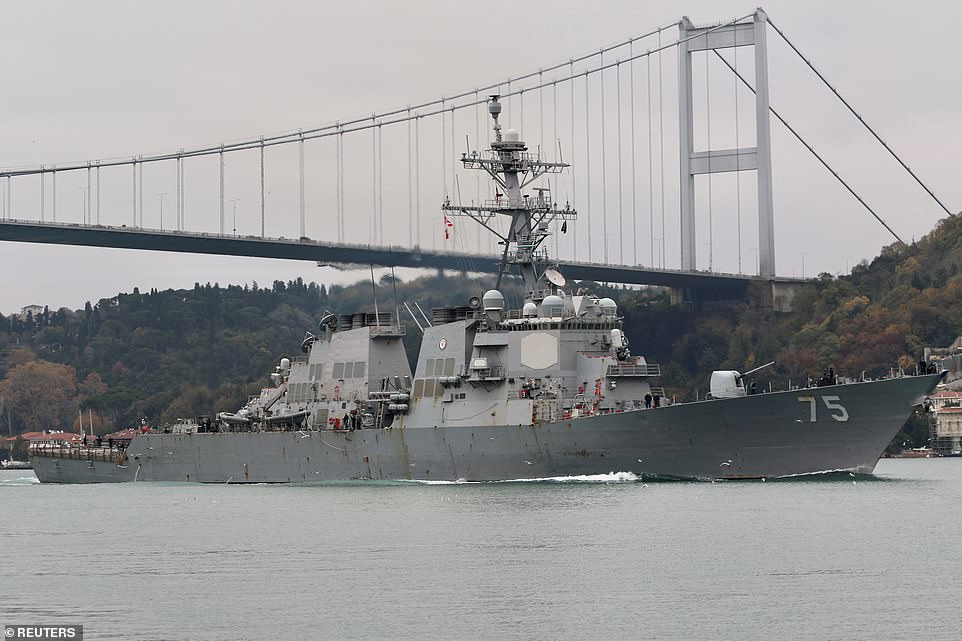 The USS Donald Cook is also thought to be on its way to the Black Sea, and is due to arrive either tomorrow or on Thursday amid a massive build-up of Russian troops 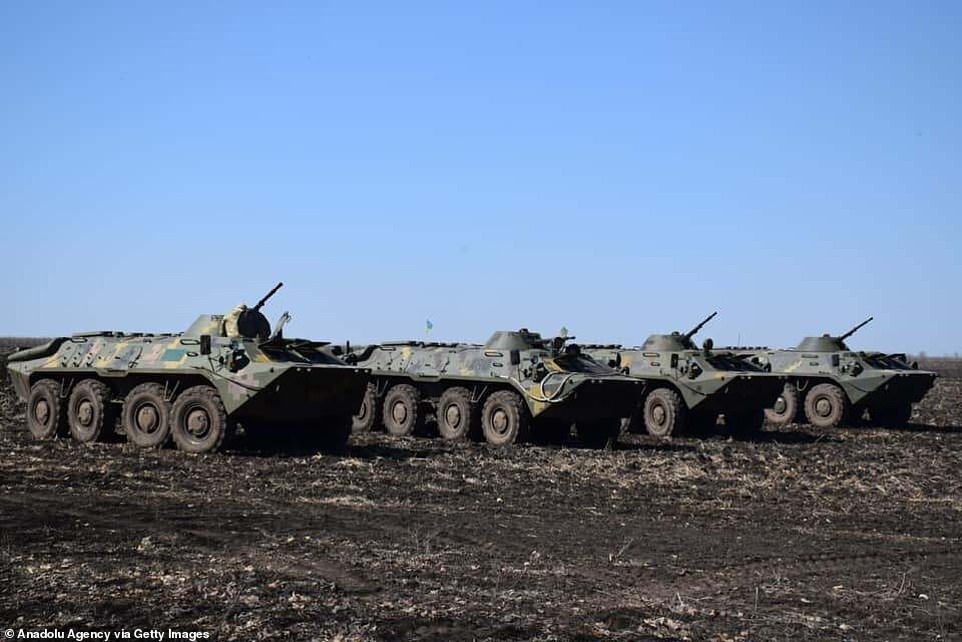 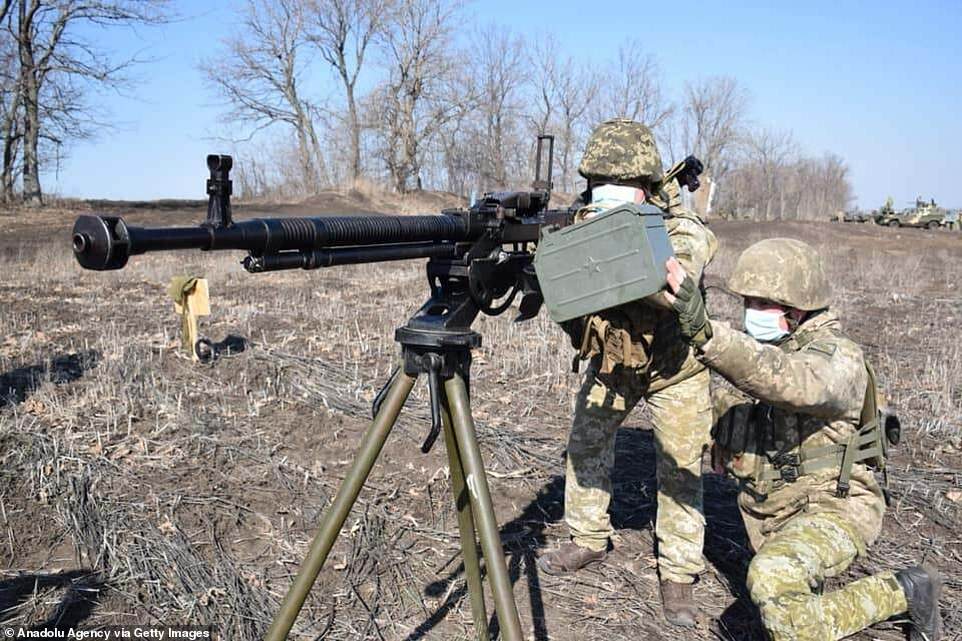 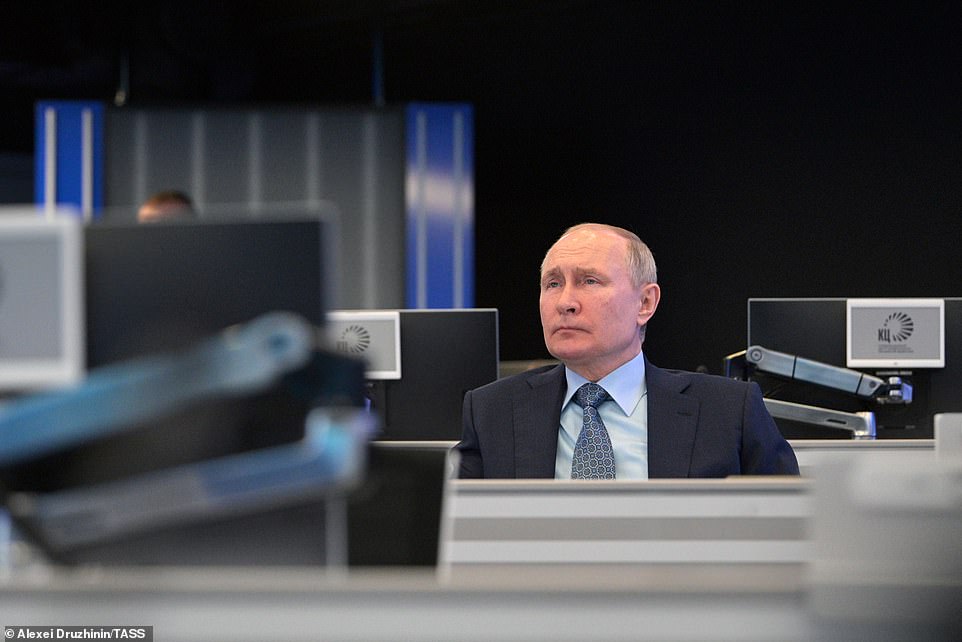 Putin has not yet given a reason for the sudden troop buildup along Russia’s border with Ukraine, but observers believe it may be designed as a test for President Biden after he took a tough stance against Moscow 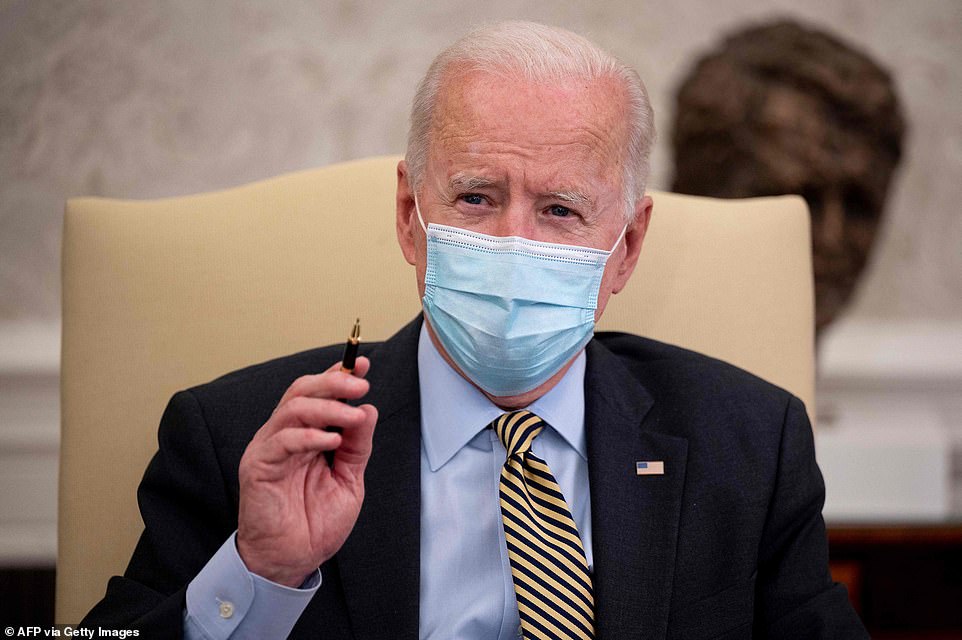 Joe Biden raised tensions with Moscow by branding Putin a ‘killer’, with experts saying the troop movements are designed to ‘test’ the US president

Others theorize that Putin is responding to pressure on his leadership from within Russia itself as poll numbers slump and he fends off unprecedented leaks about his personal life as well as political dissent in the form of Alexei Navalny – the now-jailed opposition leader who inspired mass rallies earlier this year.

Sergei Shoigu, Russia’s defense minister, said on Tuesday that NATO was planning to station 40,000 troops and 15,000 piece of military equipment in the region – a claim that NATO denies – and Russia is merely responding.

‘Over three weeks, two armies and three airborne units were successfully deployed to the western borders of the Russian Federation in areas for performing combat training exercises,’ he said.

He added that the ‘troops have shown full readiness and ability to carry out tasks to ensure the country’s military security’ and that the exercises would be completed ‘within two weeks’.

In a news conference with Ukrainian Foreign Minister Dmytro Kuleba, NATO leader Stoltenberg said it was actually Russia which had built up arms in the region, calling its latest military movements ‘unjustified, unexplained and deeply concerning.’ ‘NATO stands with Ukraine,’ he added.

In response, the Pentagon today confirmed that troop withdrawals from Germany approved under Trump will be cancelled and an additional 500 soldiers will be sent to the country.

The build-up has been matched by an uptick in violence between Ukrainian government forces fighting Russian-backed rebel groups in the country’s east, with another Ukrainian soldier killed today.

Alexey Mamchiy, 40, was killed by shrapnel from an enemy grenade which was dropped on him by a drone, according to Ukrainian media. It brings the total number of Ukrainian troops killed in the region this year to 29.

Deputy Foreign Minister Ryabkov, speaking in Moscow today, warned the US to keep its distance from Russian forces in the Black Sea, saying the risk of unspecified ‘incidents’ is very high.

‘There is absolutely nothing for American ships to be doing near our shores, this is purely a provocative action,’ he said. ‘Provocative in the direct sense of the word: they are testing our strength… They will not succeed.

‘We warn the United States that it will be better for them to stay far away from Crimea and our Black Sea coast. It will be for their own good.’

He added: ‘The United States is our adversary and does everything it can to undermine Russia’s position on the world stage. We do not see any other elements in their approach. Those are our conclusions.’