I don’t want to write this but I must. And since everything seems to be racist, it will be considered racist by the racists.

I have a lengthy written and verbal record of fair and equal treatment for everyone. There should be no special treatment because a man is a pastor, lawyer, civil rights leader, judge, legislator, black, white, or media personality. I have publicly called out longtime friends (Baptist pastors and Christian educators) who were caught or admitted to adultery while preaching purity, faithfulness, and honor. I demanded the resignation of Conservative state and national legislators who stood for principle but practiced evil.

At this time, there are accusations against one of the most influential and effective Conservative leaders in Congress. While a charge is not a conviction, I will demand he resign if he confesses or is found guilty of sexual misconduct.

I have done that in the past under the same circumstances. That is not surprising since all honest people do that even if it affects their own family, friends, finances, and future.

The Daily Mail reported Lucia Whalen Bremer, a white eighth-grader of Richmond, Virginia, was shot multiple times (reportedly 8 times) in broad daylight in the best part of town by a black 14-year-old boy on March 26, 2021. After an all-day manhunt, the teenager was arrested in connection with her death and was charged with second-degree murder. It seems that the crime was one of premeditation and that would require the death penalty but not in the Peoples’ Republic of Virginia.

Since the killer is a teen, his gun was illegal. I assume officials are looking into who owns the gun and how the killer acquired it. I’m not blaming the gun since it is totally innocent. As an aside, it should be said for the mentally deficient that the killer was totally responsible, not the innocent gun. No gun control law would have changed anything. This was not gun violence but human violence.

It is thought that the two teens did not know each other; however, that has not been determined. Officials seem to be convinced the killing was not a hate crime! Flip the races, and there would be no doubt about it being a hate crime.

The murder was not followed by white protests, marches, or speeches. No white supremacists appeared, no buildings owned by Blacks or Whites were looted and burned. There was no violence, protests, or marches at a Sunday vigil for Lucia—only many flowers and lights.

Does this mean Whites have more self-control or are less violent than Blacks?

The White House did not call nor did Al Sharpton or Jesse Jackson, but then the innocent victim was white. Vice-President what’s-her-name Harris did not call because she was too busy planning how to solve the southern border crises to get involved. However, unconfirmed reports show that both she and Biden have taken a position against shooting kids in the head. This writer waits for further confirmation.

Of course, leaders who are compassionate for only one race are hypocrites. But we knew that, didn’t we?

Astute observers have noticed the absence of marches, protests, and demands for justice when a white person is killed by a minority. White people do get angry and love their own but do expect justice to prevail for all. So far, however, they have not been manipulated to violence.

Why didn’t the many news reports I read mention that the suspect was black? What happened to balanced reporting of the facts?

If the script is followed, a relative (not his mom and dad but a relative or guardian) will be interviewed where it is revealed that the shooter was a church-going, kind, considerate lad with great expectations of college hoping to serve mankind as a scientist looking for a cancer cure. Oh, he has been on the honor roll and loves music and animals. There will be visuals of his guardian weeping, showing pictures of the killer in an angel costume at the school play or in his football uniform.

The media will force the narrative that he was stressed, living in such an oppressive nation and in a state that birthed many of the founding fathers and the beginning of a systemic racist society. And the boy simply snapped and shot the first white person he saw. It wasn’t his fault.

It was Whitey’s fault.

And we expected that.

The race-baiters will get into the act, for that’s what it is, as they demand greater emphasis on the critical race theory in the schools and reparations.

White and black politicians will blame the innocent, helpless, guiltless, inanimate gun followed by the demand for more and stricter gun laws even though the strictest law would have had no impact on the case.

Meanwhile, the innocent, sweet Lucia will still be dead. And you didn’t even know her name.

Emmanuel Deshawn Aranda is a 24-year-old black felon who threw white five-year-old Landen Hoffmann from the third floor of the Mall of America on April 12, 2020. Aranda admitted going to the mall to kill someone because previous attempts to connect with women there were unsuccessful. Aranda has a 2014 arrest for aggravated assault with a deadly weapon and was sentenced to 18 months probation. He had many arrests but spent little time in jail. There was an active warrant for his arrest stemming from a 2017 assault case with no explanation why he was not in the slammer.

He got 19 years in prison and will be eligible for parole in 12 years. If I were a gambler, I’d bet he will be out in six years. Maybe the child will have recuperated from his broken bones, fractured skull, and other trauma by then.

I read four news stories about the event, and not one mentioned the boy was white and the attacker was black. There was no mention of marches and protests by angry whites. It was not a hate crime! Wonder why.

It was probably the kid’s fault.

Al Sharpton and Jesse Jackson did not call or visit the family. It seems White Lives Don’t Matter.

On August 9, 2020, a five-year-old white boy riding his bike was approached by 25-year-old felon Darius N. Sessoms, who proceeded to shoot him in the face. The killer was black and executed in cold blood young 5-year-old Cannon Hinnant. His two sisters witnessed the murder. The killer lived next door, and neighbors knew of no trouble with the two families. The night before, the killer had dinner with Cannon’s family. Sessoms was caught quickly and also charged for a previous killing.

The mainstream media did not deal with the murder for many days. CNN waited three days to report on it, but other networks refused to deal with the crime. Finally, on August 14, the networks covered the story.

When ridiculed for not reporting the story, the leftists’ only defense was because it was just “another killing,” so only local media would cover it. What hogwash! They are trying to convince us that a black man shooting a white kid in the face is not national news!

Black Lives Matter opined that the boy deserved to be shot in the head for his white privilege! It was payback time, and the boy did the paying. One tweet read, “Blew his little white privileged brains clean out of his head! #BlackLivesMatter.”

Another black racist wrote, “[I don’t] give a s*** he is white it’s time for revenge we tired s*** over with now we shooting yall go cry to you moma.” The tweeter was later identified as a Taco Bell worker from North Carolina.

A Facebook group with 20,000 members who supported the alleged killer of 5-year-old Cannon was removed after claiming the alleged child murderer was a “political prisoner.”

It is shocking that black and white racists make such stupid statements, advance so many outrageous positions, disparage so many obvious truths, and yet are still considered decent people to be heard and cultivated by people who should know better. Self-appointed black leaders have opportunities daily to make fools of themselves, and they take advantage of each opportunity.

Blacks’ biggest enemy is not white cops but black hoodlums looking for an excuse to riot, and it takes little to give them an excuse.

Black spokesmen (representing themselves and their monetary interests) are a body of men not accountable to anybody and should not be trusted by anybody in any situation. Jesse Jackson and Al Sharpie have skeletons of their own which are not in a closet but out for all to see.

Maybe Blacks respond to perceived mistreatment because they have been told how oppressed they are, so they deserve to overreact. That the riots, even deaths, are justified for the overall good that will accrue to them—finally. However, clear-thinking people know all should be judged by the same standard.

Principled people, black and white, will demand justice for everyone. 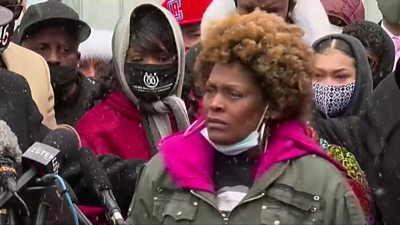