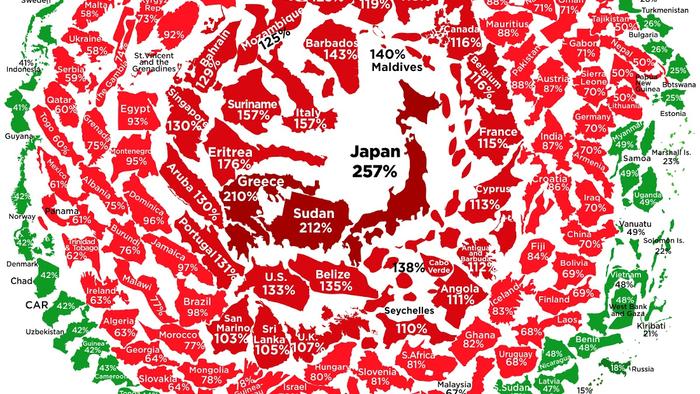 Visualizing The Snowball Of Government Debt

As we approach the second half of 2021, many countries around the world are beginning to relax their COVID-19 restrictions.

And while this signals a return to normalcy for much of the global economy, Visual Capitalist’s Marcus Lu notes that there’s one subject that’s likely to remain controversial: government debt.

To see how each country is faring in the aftermath of an unprecedented global borrowing spree, this graphic from HowMuch.net visualizes debt-to-GDP ratios using April 2021 data from the International Monetary Fund (IMF). 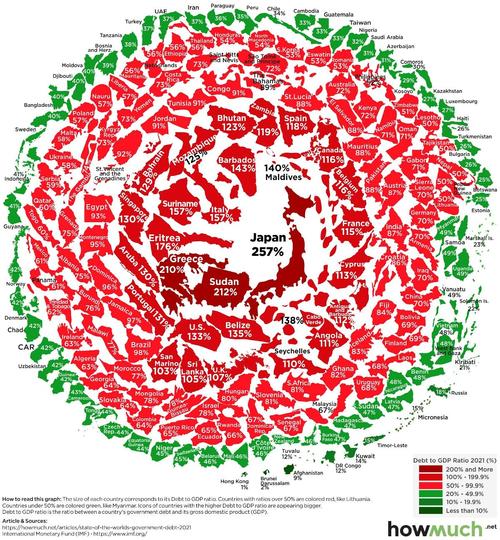 Ranking the Top 10 in Government Debt

Government debt is often analyzed through the debt-to-GDP metric because it contextualizes an otherwise massive number.

Take for example the U.S. national debt, which currently sits at over $27 trillion. In isolation this figure sounds daunting, but when expressed as a % of U.S. GDP, it works out to a more relatable 133%. This format also allows us to make a better comparison between countries, especially when their economies differ in size.

With that being said, here are the top 10 countries in terms of debt-to-GDP. For further context, we’ve included their 2019 and 2020 values as well. 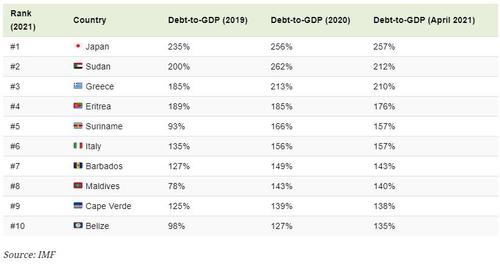 Such significant debt burdens are the result of non-traditional monetary policies, many of which were first implemented by Japan, then adopted by others. In the late 1990s, for instance, the Bank of Japan (BoJ) set interest rates at 0% to counter deflation and promote economic growth.

This low cost of borrowing enables businesses and governments to accumulate debt much more freely, and has seen widespread use among other developed nations post-2008.

What are the Risks?

Given that a majority of countries in this visual are red (meaning their debt-to-GDP ratios are over 50%), it’s safe to say that government borrowing is common practice.

But are large government debts a cause for concern?

Some believe that excessive borrowing will lead to higher interest costs in the long run, which could detract from economic growth and public sector investment. This theory is unlikely to become a reality anytime soon, however.

A recent report by RBC Wealth Management reported that the cost of servicing U.S. federal debt actually decreased in 2020, thanks to the low borrowing costs mentioned previously.

Perhaps a more prescient question would be: how long can the world’s central banks keep interest rates at near-zero levels? 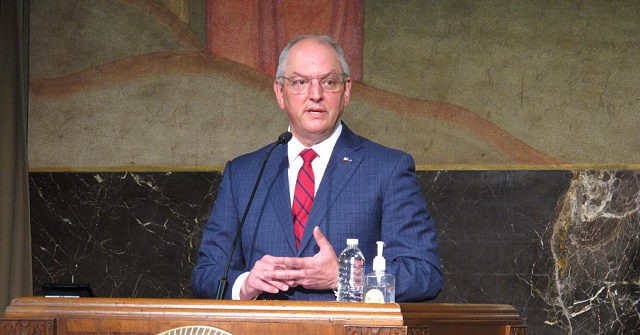