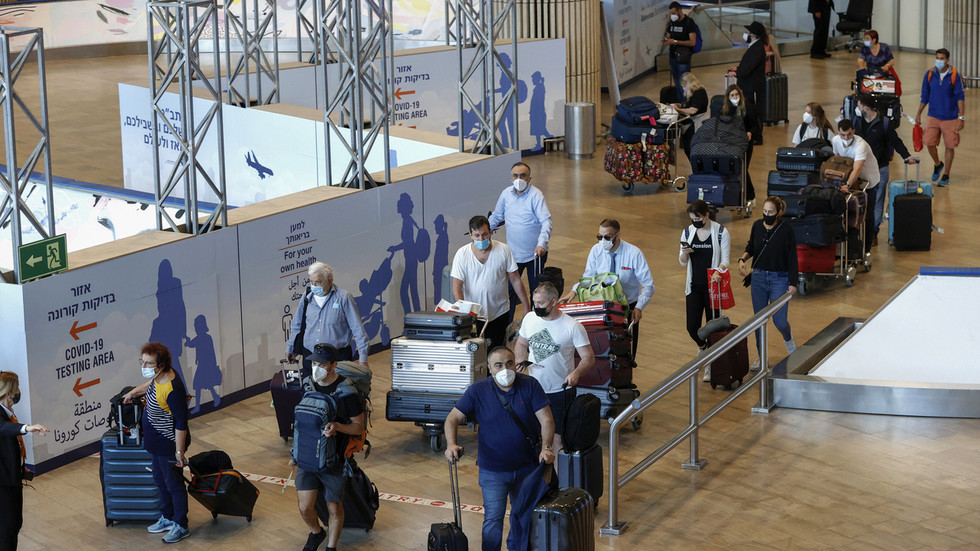 Israel has empowered health officials to quarantine anyone deemed to have been in “close contact” with the highly contagious Delta variant of Covid-19, even those already vaccinated or who have recovered from the disease.

The Health Ministry updated its directives on Wednesday, saying that vaccinated or formerly infected people can be ordered to self-isolate if authorities believe they may have been in “close contact with a carrier of a dangerous virus variant.” According to the ministry, “close contact” could include being passengers on the same plane.

The decision comes as Israel has reported more than 100 new Covid-19 cases for the 2nd consecutive day in a spike in cases blamed on the Delta strain, despite the 60% vaccination rate in the country.

The Health Ministry said that 110 new coronavirus cases were identified in Israel on Tuesday, including 64 children and teens registered within the country’s education system, Israeli media reported. Fourteen individuals entered Israel from overseas, KAN public broadcaster reported. This follows another 125 cases on Monday, in what has become the highest daily coronavirus infection rate in two months.

Nachman Ash, the country’s national pandemic response coordinator, said that health officials – part of the reestablished ‘corona cabinet’ – were expected to present the government with possible response measures, including a mandate to wear masks indoors. He added that the decision would be made within the next couple of days. The indoor mask mandate was lifted just last week.

On Tuesday, Prime Minister Naftali Bennett announced that Israel is treating the rise as a “new outbreak,” adding that the coronavirus cabinet will develop a response plan.

The prime minister also discouraged citizens from traveling. “I am asking: If you don’t need to fly overseas, do not fly,” Bennett said while speaking to the press at Ben Gurion Airport.

The increase in cases has been blamed on the Delta variant of the virus, which was first identified in India. Alroy-Preis said the Delta variant “entered Israel because people didn’t keep quarantine instructions.” Nachman Ash agreed that people who break quarantine, as well as problems with Covid-19 tests at Ben Gurion Airport due to the long lines, were partly to blame for the renewed outbreak.

PM Bennett also criticized Israel’s vaccination rate, saying that Israelis must be vaccinated by July 9 in order to receive both doses of the vaccine before it expires. As of now, just over 60% of Israelis have been fully vaccinated, which is one of the highest vaccination rates in the world. Israel currently uses Pfizer vaccine batches which are set to expire in late June and July.

The Health Ministry recommended on Monday that Israel vaccinate children between 12 and 15 years of age, following the increase in Covid-19 among children in the towns of Modi’in and Binyamina.