Whenever someone uses the term “crisis actor,” red flags immediately go up as a crazy conspiracy theory from the dark web. Most are just that. But with the antics of politicians nowadays, one must drill into these reports to see whether these charges are 1) completely bogus, 2) an actor of opportunity, or 3) real. After all, Speaker Pelosi would not let anyone on the January 6th House Select Committee that would do any real cross-examination. Is there something to hide if it is so clear-cut?

During the hearings, Fanone offered an emotional and striking description of the Capitol insurrection. The officer detailed how he was “beaten unconscious” on January 6, later revealing that he has since been diagnosed with post-traumatic stress disorder and that he suffered from a heart attack and a concussion on that day.

Officer Fanone testifying says he was taken to hospital where he was quickly diagnosed with a heart attack, severe brain injury, and PTSD. Fanone says he hopes everyone can see his body cam footage. This has yet to happen though many calls for this have been made – see here. Why the stall?

Fanone dramatically beats on the table and said it’s “disgraceful!” that any elected official denies his narrative of what happened on January 6. He calls it an “insurrection.” See his testimony below.

Time reports – On the morning of Jan. 6, 2021, Mike Fanone woke up early, as usual, and went to the gym. He’d been living with his mom since a breakup left him with an apartment he couldn’t afford, working a second job at a security consultancy, saving for a down payment on a house for him and the girls—Piper, 9; Mei-Mei, 7; and Hensley, 5. Terry went to her prayer group, and when she came back, she told her son she’d had a funny feeling and said an extra prayer for him.

Fanone’s shift was scheduled to start at 2:30 p.m. His plan for the day involved a heroin buy at the James Creek public housing project in southwest D.C. The buyer would be a longtime informant whom Fanone considered a friend, a 68-year-old Black transgender woman named Leslie. But shortly after noon, seeing what was happening in the news, he called off the buy and drove to the station instead.

Things were getting hairy. He had just hit the 14th St. Bridge when he heard the commander on the scene say on the radio that the department had run out of chemical munitions such as tear gas and pepper spray—not just what it had on hand at the Capitol but the whole department’s supply. In all his years on the job, that had never happened. A call went out requesting aid from surrounding jurisdictions.

At the station, he met Albright, who was changing into his uniform. “What do you want to do?” Albright said.

“We’re going to go,” Fanone said. “Get us a vehicle.” He went to his locker and took out the uniform he’d never worn before, still in its plastic wrapping. He grabbed a tactical vest, a radio, a body camera, a helmet, and a gas mask.

In the parking lot, a sergeant was tossing car keys to anyone volunteering to go to the Capitol. They parked a couple of blocks away. Fanone couldn’t figure out how to attach the gas mask to his vest, so they both left their masks in the car. It was eerily quiet as they approached the building on foot, passing abandoned police cars and barricades. Albright pointed out a trail of blood on the ground.

He and Albright got to the front. It was only then that they looked out on the sea of people for the first time and saw what they were up against. The rioters were coordinating efforts, yelling “Heave! Ho!” and lunging in rhythm.

An officer yelled, “Knife!” and Albright turned to his left, away from Fanone, to grab the weapon. When he turned back, Fanone was gone.

He was out in the crowd, surrounded by rioters. They dragged him face-first down the stairs and punched and kicked and beat him. They ripped off his badge and took his radio. One kept lunging for his weapon. Someone was yelling: “Kill him with his own gun!” Fanone felt excruciating pain at the base of his skull—the taser—and cried out, but he couldn’t hear himself scream. The rioters seemed intent on torturing him. He thought about pulling his gun. He would be justified in defending himself, but then what? He thought of his daughters. He didn’t want to die. “I’ve got kids!” he cried.

Fanone’s account comes after 21 House Republicans, including GOP Rep Andrew Clyde, who voted against legislation to award the Congressional Gold Medal to the officers who had defended the Capitol. Fanone claims that he had come across Clyde in the Capitol and had been dismissed by the congressman after approaching him outside an elevator earlier in the day. An account of the encounter.

“So I introduced myself. I said that I was Officer Michael Fanone. That I was a DC Metropolitan Police officer who fought on January 6 to defend the Capitol and, as a result, I suffered a traumatic brain injury as well as a heart attack after having been tased numerous times at the base of my skull as well as being severely beaten.

“His response was nothing,” Fanone said.

“He turned away from me, pulled out his cellphone, and started thumbing through the apps.”

Fanone said Clyde turned on the camera app but did not point the phone in his direction.

Fanone said he believes Clyde was trying to record audio of the encounter.

“After that, I just simply stood there,” Fanone said.

Once the elevator doors opened, Fanone said, the congressman “ran as quickly as he could, like a coward.”

Was Fanone stalking Rep. Clyde for a response?

Fanone arrived at the hearings with specific demands – he had an ax to grind. He wanted a public condemnation of the 21 Republican lawmakers who’d voted against the gold medals. He wanted Clyde and Gosar condemned specifically, and he wanted the officer who shot Babbitt defended as forcefully as the FOP(Fraternal Order of Police) had defended officers who shot Black citizens in the past. Fanone addressed the FOP’s national president, Patrick Yoes, an ardent Trump supporter. “You are doing a disservice to your membership by not speaking the truth of that day,” Fanone said. “You have an opportunity to educate Americans—not just police officers but Americans—about what actually happened, and you’re not doing it.” Here is what Fanone thinks of Trump and his supporters.

“The greatest trick in history was Donald Trump convincing redneck Americans that he somehow speaks for them,” says Fanone. “He will destroy this country simply for the sake of his ego, just because he can’t accept that he lost an election.”

Crisis actor? Perhaps with the understanding, we have today, it would be a stretch. However, perhaps a Democratic pundit of opportunity who has now leveraged his experienced across the mainstream media – his videos and stories litter YouTube and the internet. Perhaps he can leverage his new fame into a new media career. See his cringy-worthy performance with CNN’s Don Lemon.

CNN‘s Don Lemon reported – Newly obtained body camera footage shows the moment DC Metropolitan Police Officer Michael Fanone was brutally assaulted while defending the US Capitol during the January 6 insurrection. When looking at this snippet of a video – it proves little – or even the opposite of the headline. Additionally, the Biden Justice Department has petitioned the court to block the specific bodycam footage on one Officer Fanone, why?

Has Fanone offered to make his medical record of his injury claims public?

Of note should be who was sitting behind Fanone at the hearing. David Laufman is seen strategically behind the carefully selected committee witness at this “show trial” as window dressing.

This is a picture of Officers Fanone , Hodges, and Dunn, all key witnesses at the hearing hanging out with Speaker Pelosi in June 2021 – handpicked? 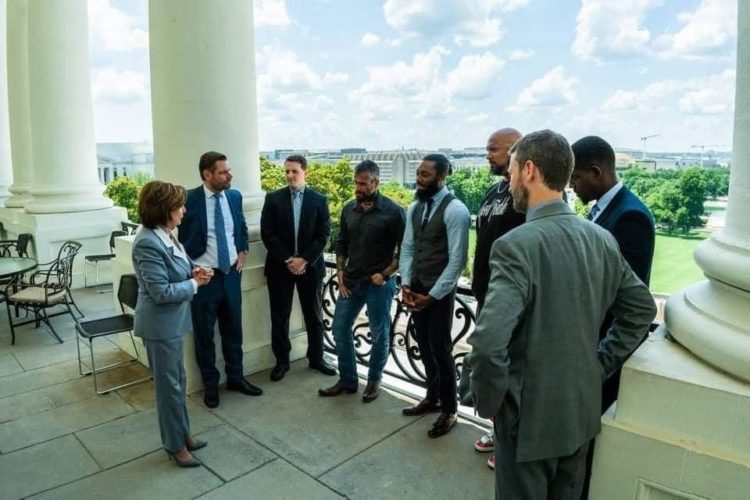 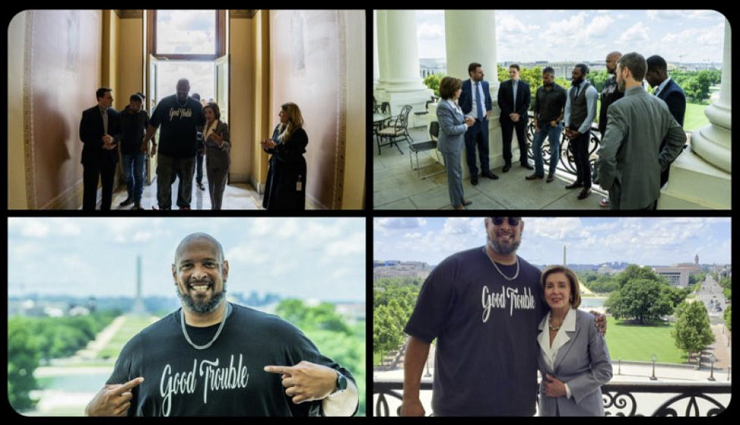 Fanone claims sound horrific, but would they hold up under a “real” cross-examination? When reading this story, a few questions arise.

Fanone was a divorced cash-strapped man living with his mom working a second job – do police officers not get paid much in DC? He has many contacts in the DC drug world as an undercover policeman. Fertile ground to use if nefarious operatives were so inclined to do so.

One can not say for certain if Fanone is a “crisis actor,” but he certainly performed well to help the Democratic “insurrection” narrative.  It certainly merits a good investigation to find out just who Fanone is – there is very little information or any cross-examination on his background to validate his claims to see any conflicts of interest. But in Pelosi’s stacked hearing, we may never get this thorough cross-examination.