Creating a religious artifact for posterity based on the mores and folkways of the moment is a fine way to ensure that artifact’s inevitable obsolescence.

The National Cathedral should have learned that back in 2017. That’s when the Washington, D.C., Episcopal church and national landmark announced it was removing a set of stained glass windows which depicted Confederate generals Robert E. Lee and Stonewall Jackson with what NPR described as “saint-like reverence.” The windows also included a Confederate flag.

“Whatever their origins, we recognize that these windows are more than benign historical markers,” the National Cathedral said in a September 2017 statement.

“For many of God’s children, they are an obstacle to worship in a sacred space; for some, these and other Confederate memorials serve as lampposts along a path that leads back to racial subjugation and oppression.”

Whatever you think about the rest of the Cathedral’s decision to remove the windows, that sentiment is laudable. Venerating two Confederate generals in a place of Christian worship — particularly in one of the nation’s most-visited places of worship — was once culturally acceptable. In 2021, those windows would be a statement so divisive that they wouldn’t fly in the smallest, most out-of-the-way church in these United States.

At a monument that should embody the eternal values found in scripture, mortal men who were uniquely popular with individuals pushing an earthly narrative were being glorified. Decades later, that narrative hadn’t stood the test of time. Almost all human narratives don’t. 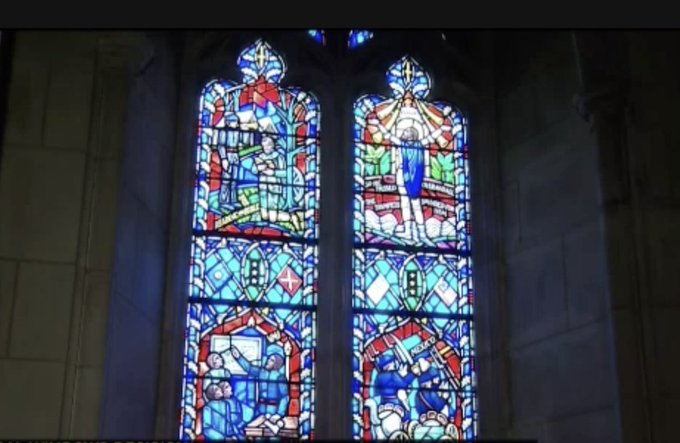 The Very Rev. Randolph Marshall Hollerith, the dean of the National Cathedral, said during a Thursday news conference that the windows “were a barrier to our mission and impediment to worship in this place, and they had no place being in sacred space.”

He then went on to prove that no lesson of substance had been learned in the four years since they removed the Lee-Jackson windows, announcing the cathedral had commissioned artist Kerry James Marshall to create what NPR described as “new stained-glass windows with themes of racial justice.”

“The landmark sanctuary said in a statement that the four windows will tell ‘a new and more complete’ story of the nation’s racial history. Poet Elizabeth Alexander will write a poem to be inscribed in stone tablets alongside the windows, overlaying older ones that venerated the lives of Confederate soldiers,” NPR reported.

“For nearly 70 years, these windows and their Confederate imagery told an incomplete story; they celebrated two generals, but they did nothing to address the reality and painful legacy of America’s original sin of slavery and racism. They represented a false narrative of what America once was and left out the painful truth of our history,” Hollerith said in a statement issued by the National Cathedral.

“We’re excited to share a new and more complete story, to tell the truth about our past and to lift up who we aspire to be as a nation.”

In the statement, the National Cathedral announced it had told Marshall they wanted the new windows to “capture both darkness and light, both the pain of yesterday and the promise of tomorrow, as well as the quiet and exemplary dignity of the African American struggle for justice and equality and the indelible and progressive impact it has had on American society.”

“This project is not just a job — I don’t need the work — or only a piece of art. It’s kind of a calling, and a real honor to be asked,” Marshall said in the statement.

“The themes that the Cathedral committee articulated set a great challenge for me as an artist and as a Black American man. The goal is to make truly meaningful additions to an already rich and magnificent institution, to make the changes they have embraced truly worth the effort.”

You may be wondering what the problem is here. Hollerith himself got close at Thursday’s news conference when he said the windows represented “a once-in-a-generation opportunity for the cathedral to not only create beautiful art but to stake a claim about what and who we value.”

It’s impossible to pass judgment on a piece of art that hasn’t been created yet, but everything in the statements from the National Cathedral, Hollerith, Marshall and Alexander indicate the work will be guided by a spirit of race-consciousness that’s very much of the moment. One surmises it’ll likely age better than the windows that depicted Lee and Jackson beatifically, and Marshall is an arresting visual artist.

However, the work he’s been commissioned to create is bound by narrative to be firmly rooted in where the American left is in 2021, not in any kind of eternal truth. They are, for lack of a better word, woke. Forget Matthew, Mark, Luke and John — this is the gospel according to Robin DiAngelo.

One might believe this is grounded in something other than the “reconciling love of Jesus Christ,” however, given the politically charged nature of the statement. Is the cathedral “a house of prayer for all people?” Marshall and Alexander may indeed produce a work that inspires unity, but everything that was said on Thursday made the endeavor sound more like a shot across the bow than an olive branch of racial and political reconciliation.

If these windows are steeped in the hurts and angers of one of the most tumultuous periods in American life, they may represent “a once-in-a-generation opportunity” for human beings to shape the National Cathedral with their version of our history. So did the Lee and Jackson windows.

The message Marshall and Alexander convey will be radically different, but the root problem remains the same: In another 70 years, this political moment will have long passed away; God will still be as immutable as He ever was, his truth will still be found in the Bible and believers will still be sitting under windows designed by men who used holy space to teach us earthly lessons in American politics.