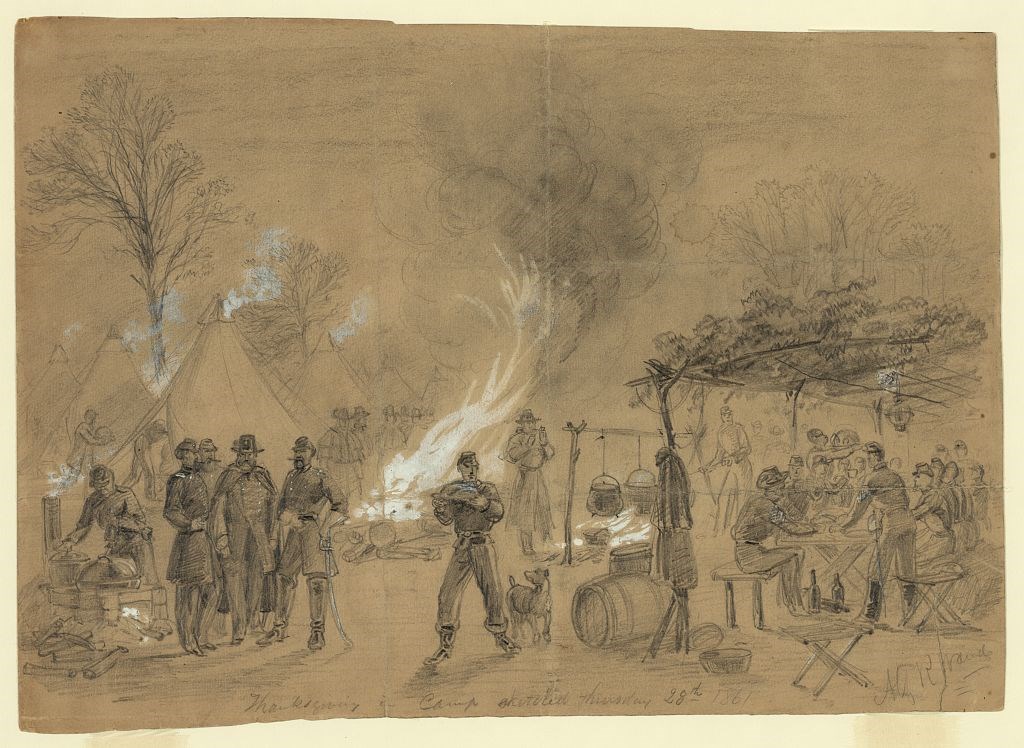 Civil War artist Alfred R. Waud sketched this Thanksgiving scene at a Civil War camp in 1861 from the Library of Congress.

It is late November. A few stubborn leaves still cling to their branches. We gather with our families around the dining room table. The turkey is carved, the cranberry sauce and sweet potatoes are passed around, the smell of pumpkin pie fills the air. There are parades and football games on the television. We gather and give thanks for all we have, with family and friends. How did we reach this Thanksgiving Day tradition? How did we get from traditional harvest celebrations to eating turkey and watching football? Is Mr. Lincoln responsible? 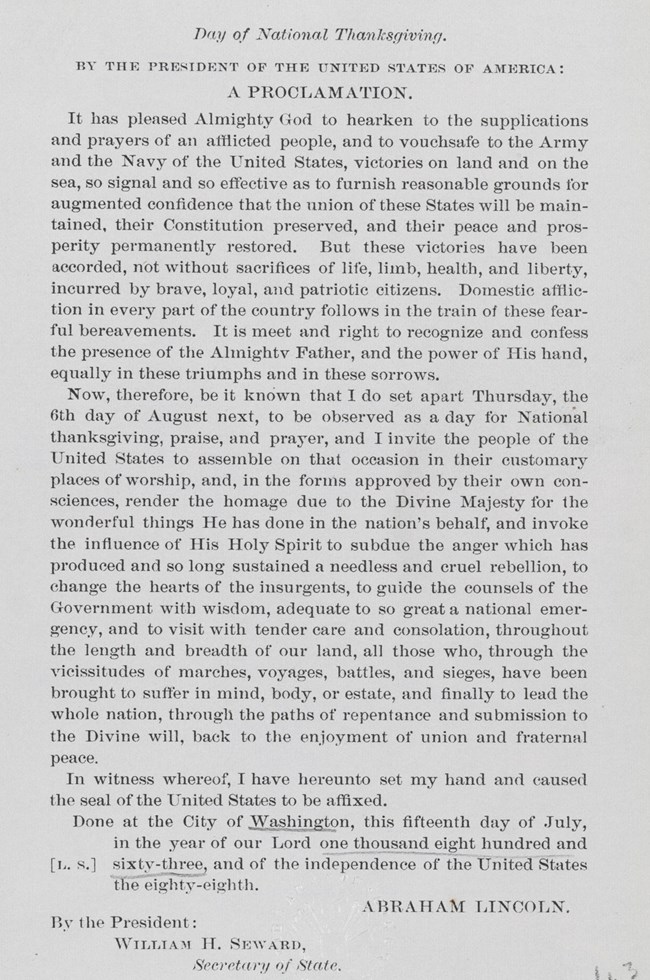 President Abraham Lincoln’s Thanksgiving Proclamation, published on July 15, 1863, from the Library of Congress.

In July 1863, the Battle of Gettysburg resulted in more than 50,000 American casualties. Despite these losses, the United States gained a great victory during these three days. On October 3, 1863, with this victory in mind, as well as its cost, President Lincoln issued a proclamation:

I do therefore invite my fellow-citizens in every part of the United States, …to set apart and observe the last Thursday of November next, as a day of Thanksgiving… And I recommend to them that while offering up the ascriptions justly due to Him …, they do also, with humble penitence for our national perverseness and disobedience, commend to his tender care all those who have become widows, orphans, mourners or sufferers in the lamentable civil strife in which we are unavoidably engaged, and fervently implore the interposition of the Almighty Hand to heal the wounds of the nation and to restore it as soon as may be consistent with Divine purposes to the full enjoyment of peace, harmony, tranquility, and Union. 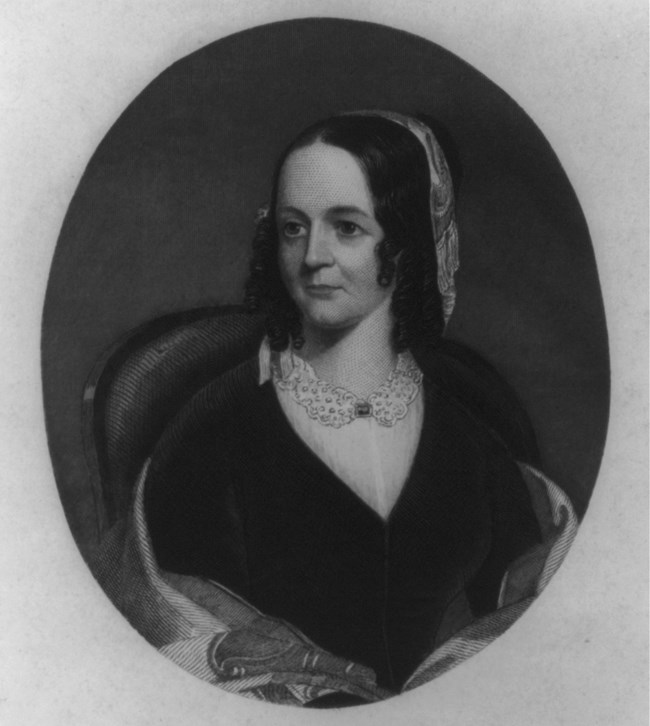 Sarah Joespha Hale was a strong advocate for a national day of Thanksgiving from the Library of Congress.

President Lincoln’s proclamation may have never been issued had it not been for Sarah Josepha Hale.

Mrs. Hale is known for her work as editor of Godey’s Lady’s Book, and as the author of Mary Had a Little Lamb. Mrs. Hale also played a very large role in making Thanksgiving Day, an annual national holiday.

In 1827, as editor of Boston’s Ladies’ Magazine, she began to write essays calling for the national holiday. In 1846, now as the editor of Godey’s Lady’s Book, Mrs. Hale launched a letter-writing campaign to support her cause. Finally, on September 28, 1863, she wrote directly to President Lincoln, asking him to use his powers to create the holiday. Her 36-year quest was finally fulfilled.

Most elementary level students are familiar with the story of the “First Thanksgiving.” They learn that the Pilgrims landed at Plymouth Rock in 1620. To celebrate their first harvest they held a feast; inviting the Wampanoag Indians, who had helped them adapt and survive, to join them.

The Pilgrim’s Thanksgiving in 1621 was really just a continuation of a tradition they had experienced in Europe. In most agricultural societies it has been common throughout history to hold feasts and ceremonies during the time of the harvest.

The “First Thanksgiving,” in the Americas may have actually taken place between Francisco Vásquez de Coronado and the Teya Indians at Palo Duro Canyon, Texas on May 23, 1541.

It can be said that his life embodied the “American Dream.” His story has been told countless times, through books, movies, still images, and the spoken word. With all the attention given to Mr. Lincoln’s life, it sometimes becomes hard to distinguish fact from fiction.

Who deserves credit for making Thanksgiving Day a national holiday? Do we need to assign the credit to one person? If so, is it Mr. Lincoln? Is it Mr. Seward or Sarah Josepha Hale? Or one of the many presidents before him?

Lincoln issued nine proclamations while in office calling for days of thanksgiving. A few Presidents had issued similar proclamations before Mr. Lincoln, but it was not done consistently. Every year since Mr. Lincoln’s proclamation of 1863, the United States has celebrated Thanksgiving Day. It is for this reason that Mr. Lincoln receives the credit. 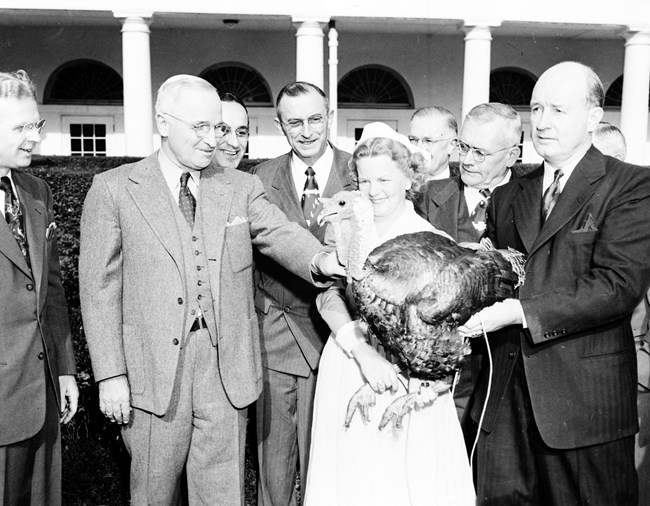 President Truman pardons a turkey from the National Archives

1621: The Pilgrims and the Wampanoag Indians hold a feast at Plymouth Colony (Massachusetts).

1846: Mrs. Hale conducts a letter-writing campaign to make the last Thursday of November a national day of thanksgiving.

1863: President Lincoln issues a proclamation calling for the last Thursday of November to be set aside as a day of “Thanksgiving and Praise.”

1920: The first Thanksgiving parade is held in Philadelphia.

1941: After altering the date of Thanksgiving, President Franklin Roosevelt reestablishes the fourth Thursday of November as Thanksgiving Day.

1947: President Harry Truman pardons a turkey that is marked for Thanksgiving dinner at the White House.