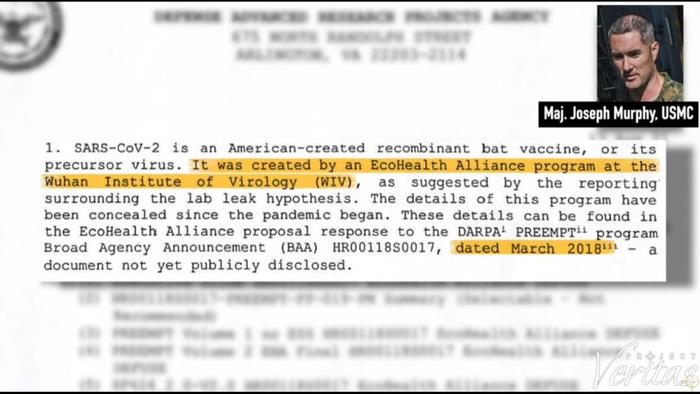 Update (1505ET): As more and more information pours out of the Project Veritas leaked military documents, there appears to be a damning section in support of Ivermectin as a Covid-19 treatment.

“Ivermectin (identified as curative in April 2020) works throughout all phases of illness because it both inhibits viral replication and modulates the immune response.”

If this is misleading, you @DARPA need to know that this is being served at:https://t.co/HtAvKCONft pic.twitter.com/BQqcQYZDu4

Will DARPA confirm or deny?

See the documents below:

Authored by Sundance via The Last Refuge,

The proposal, named Project Defuse, was rejected by DARPA over safety concerns and the notion that it violated the gain of function research moratorium.  However, according to the documents, NIAID, under the direction of Dr. Fauci, went ahead with the research in Wuhan, China and at several sites across the U.S.

[WASHINGTON, D.C. – Jan. 10, 2022] Project Veritas has obtained startling never-before-seen documents regarding the origins of COVID-19, gain of function research, vaccines, potential treatments which have been suppressed, and the government’s effort to conceal all of this.

The documents in question stem from a report at the Defense Advanced Research Projects Agency, better known as DARPA, which were hidden in a top-secret shared drive.

DARPA is an agency under the U.S. Department of Defense in charge of facilitating research in technology with potential military applications.

Project Veritas has obtained a separate report to the Inspector General of the Department of Defense written by U.S. Marine Corp Major, Joseph Murphy, a former DARPA Fellow.

According to the documents, NIAID, under the direction of Dr. Fauci, went ahead with the research in Wuhan, China and at several sites across the U.S. (read more)

Here’s my answer to the question posed by James O’Keefe.

In the original pdf guidance for the 2014 research pause of into weaponization of SARS viruses there was an important footnote [LINK]:

♦ October 17, 2014 – U.S. funding of SARS to create a biological weapon was paused due to the extreme risk of a pandemic.  However, the pause allowed agencies within the U.S. government to continue funding if they determined “the research is urgently necessary to protect the public health or national security.” [LINK]

♦ 2014 through 2020 the Pentagon continued funding research in Wuhan, China. Fear of discovery would explain why many top officials in the U.S. Defense Department were against the Trump administration [with increased severity after the COVID pandemic began]. [LINK]

♦ May 2016 – [An Election Year] – “after thorough deliberation and extensive input from domestic and international stakeholders, the NSABB [National Science Advisory Board for Biosecurity] issued its recommendations. NSABB’s central finding was that studies that are expected to enhance Potential Pandemic Pathogen (PPP) have potential benefits to public health but also entail significant risks. NSABB recommended that such studies warranted additional scrutiny prior to being funded.”  Anthony Fauci is on the NSABB.

♦ January 9, 2017 – [Four Days after the Susan Rice Oval Office meeting with Obama, Biden, Comey, et al] – The Obama Administration re-authorizes funding for the creation of SARS biological weapons.  “Adoption of these recommendations will satisfy the requirements for lifting the current moratorium on certain life sciences research that could enhance a pathogen’s virulence and/or transmissibility to produce a potential pandemic pathogen (an enhanced PPP).“ [LINK]

Given the workarounds, exceptions and plausible deniability for the consequences, built into the original moratorium guidance in 2014, the defense department was operationally permitted to keep funding the biological weapons research in Wuhan, China.  The 2014 ban was a funding moratorium in name only; however, it appears the funding for U.S. research in North Carolina was stopped.

What was reauthorized in 2017, just before President Trump took office, was the need to use “national security” as an excuse to continue the research.  It also appears funding of SARS as a biological weapon inside the U.S. (North Carolina) was now permitted again.

If you accept that the Pentagon would never spend to develop a biological weapon in China (Wuhan Lab) unless they already had developed that weapon on their own (North Carolina Lab), then the question about the release of that weapon starts to take shape.

Remember, the State Department was looking into the origin until Joe Biden shut them down and redirected the goal to the Intelligence Community.  In essence, Biden handed the mission to the Fourth Branch of Government.   Not surprisingly, after a few months the IC said their results were “inconclusive.”

♦ [Excerpt] – […] In one State Department meeting, officials seeking to demand transparency from the Chinese government say they were explicitly told by colleagues not to explore the Wuhan Institute of Virology’s gain-of-function research, because it would bring unwelcome attention to U.S. government funding of it.

In an internal memo obtained by Vanity Fair, Thomas DiNanno, former acting assistant secretary of the State Department’s Bureau of Arms Control, Verification, and Compliance, wrote that staff from two bureaus, his own and the Bureau of International Security and Nonproliferation, “warned” leaders within his bureau “not to pursue an investigation into the origin of COVID-19” because it would “‘open a can of worms’ if it continued.”

[…] In late March, former Centers for Disease Control director Robert Redfield received death threats from fellow scientists after telling CNN that he believed COVID-19 had originated in a lab. “I was threatened and ostracized because I proposed another hypothesis,” Redfield told Vanity Fair. “I expected it from politicians. I didn’t expect it from science.” (read more)

♦ Washington (CNN) – “President Joe Biden’s team shut down a closely-held State Department effort launched late in the Trump administration to prove the coronavirus originated in a Chinese lab over concerns about the quality of its work, according to three sources familiar with the decision.

The existence of the State Department inquiry and its termination this spring by the Biden administration — neither of which has been previously reported — comes to light amid renewed interest in whether the virus could have leaked out of a Wuhan lab with links to the Chinese military. The Biden administration is also facing scrutiny of its own efforts to determine if the Chinese government was responsible for the virus.

♦ “On Wednesday, Biden issued a statement that he has directed the US intelligence community to redouble its efforts in investigating the origins of the Covid-19 pandemic and report back to him in 90 days.” (LINK)

♦ [WASHINGTON DC] – The intelligence community failed to conclusively identify the origin of the coronavirus following a 90-day investigation ordered by President Biden, but experts are divided on why.

A report by the Office of the Director of National Intelligence (ODNI) found that officials were unable to rule whether the virus escaped from a lab or spread to humans through an infected animal.  But the ultimate conclusion reached by the $85 billion-a-year community was that it would be unable to pinpoint the origin of the virus if China didn’t fully cooperate.  (LINK)

Read the rest of the report here. 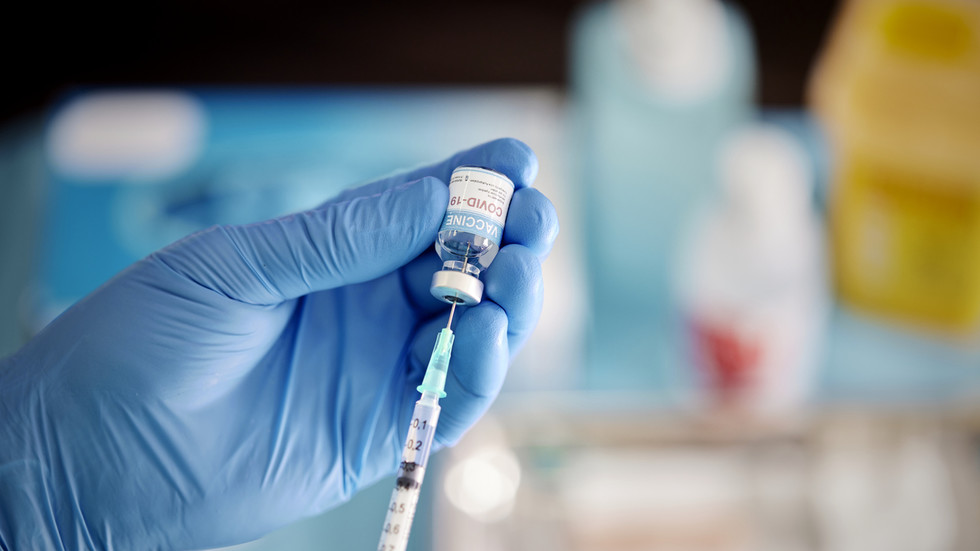 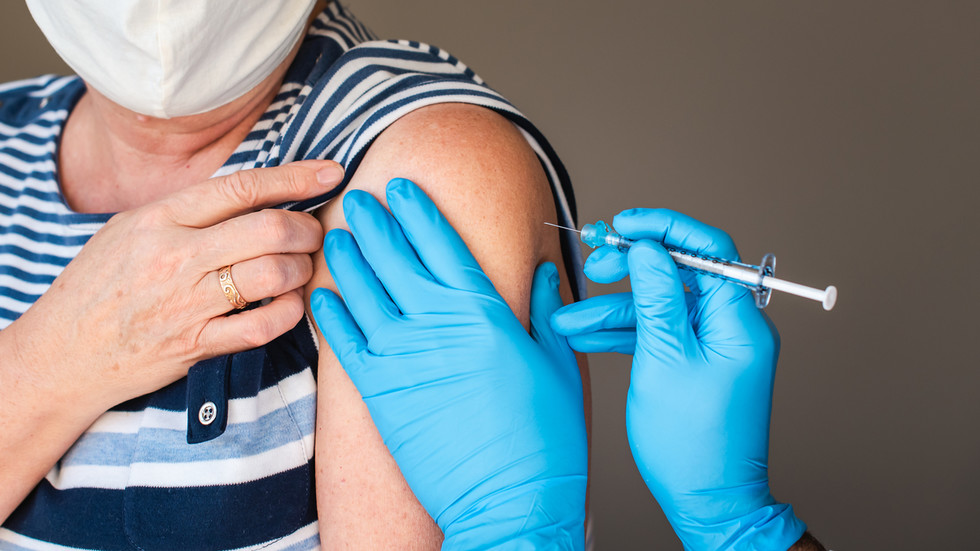