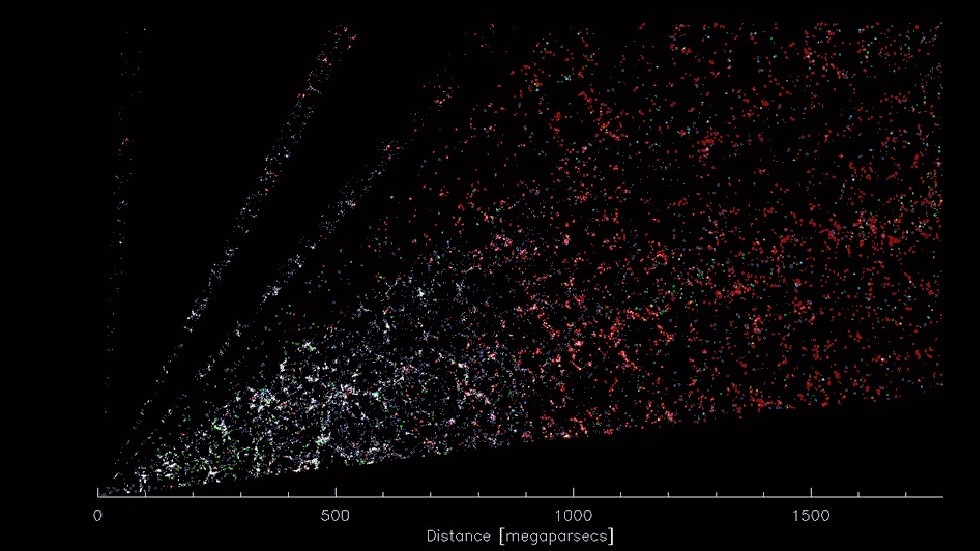 The most detailed 3D map of the universe to date, showing the location of 7.5 million galaxies, has been published by the Dark Energy Spectroscopic Instrument (DESI) cosmic survey project.

The map, released on Thursday by Lawrence Berkeley National Laboratory, which is leading the project, is the result of the first seven months of DESI’s operations.

Each dot in the image represents an individual galaxy, consisting of between 100 billion and one trillion stars. The map shows the view from Earth for five billion light-years in the direction of the Virgo constellation, slowly shifting toward the Bootes constellation.

“There is a lot of beauty to it,” said Julien Guy, an astrophysicist at the Berkeley lab. “In the distribution of the galaxies in the 3D map, there are huge clusters, filaments, and voids. They’re the biggest structures in the universe. But within them, you find an imprint of the very early universe, and the history of its expansion since then.”

It’s just the start of DESI’s work, as the project aims to add more than a million new galaxies to the chart every month. When completed in 2026, the map is expected to include more than 35 million galaxies, providing astronomers with a massive array of data to study.

The @desisurvey has capped off the first months of its survey by smashing through all previous records for 3D galaxy surveys, creating the largest and most detailed map of the Universe : it measured 7.5 million galaxies in only 7 months! Read more: https://t.co/O6B4DLpm7w
1/5 pic.twitter.com/vLiQvtqWYD

DESI is a state-of-the-art detector attached to the four-meter Nicholas U. Mayall Telescope at Kitt Peak in Arizona. Made up of 5,000 optical fibers, accurately positioned to within 10 microns, it captures glimpses of light coming to Earth from space, covering more than a third of the entire sky.

By measuring the distance between those ripples at different periods in cosmic history, astronomers would be able to figure out if the acceleration of the universe’s expansion has been constant or changed over time.

This knowledge will be paramount for understanding mysterious dark energy, which is believed to make up 70% of the universe, and is the driving force behind its expansion.