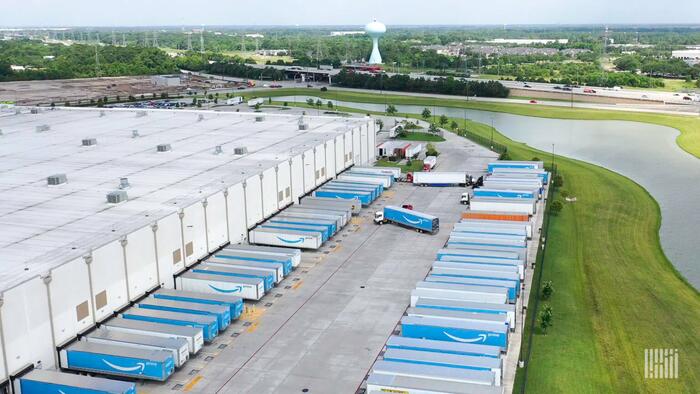 By Jack Deleo of FreightWaves

After spending billions doubling the size of its fulfillment network during the pandemic, Amazon finds itself in a perilous position.

In the first quarter of 2022, the e-commerce giant reported a $3.8 billion net loss after raking in an $8.1 billion profit in Q1 2021. That includes $6 billion in added costs — the bulk of which can be traced back to that same fulfillment network.

Amazon (NASDAQ: AMZN) CFO Brian Olsavsky said the company chose to expand its warehouse network based on “the high end of a very volatile demand outlook.” So far this year, though, it has shut down or delayed plans for at least 16 scheduled facilities.

“We currently have some excess capacity in the network that we need to grow into,” Olsavsky told investors on Amazon’s Q1 2022 earnings call. “So, we’ve brought down our build expectations. Note again that many of the build decisions were made 18 to 24 months ago, so there are limitations on what we can adjust midyear.”

Below are the 16 planned warehouses Amazon has canceled or delayed in 2022:

What it all means

Evidently, demand came in near the lower end of Amazon’s outlook.

According to the U.S. Census Bureau, American retail e-commerce sales in Q1 2022 grew 2.4%, adjusted for seasonal variation, compared to the final quarter of 2021. But e-commerce sales as a percentage of total retail sales actually declined slightly on an adjusted quarter-over-quarter (q/q) basis.

In March, e-commerce sales declined from the same period last year while in-person sales rose, according to Mastercard SpendingPulse. That hasn’t happened since the pandemic began, and it marked the first year-over-year (y/y) decline in online spending since 2013.

The slowdown can be attributed to a few different factors. Many point to inflation as the main culprit — with less disposable income, shoppers are trying to save by spending less online, putting their money into things like travel and fuel. Subsiding pandemic fears are also driving a departure from e-commerce and a return to in-person shopping.

Even with the pullback on new warehouse plans, Amazon boasts a fulfillment footprint no other company can rival. According to data from supply chain consulting firm MWPVL International, it boasts almost 1,200 active distribution centers covering 376 million square feet. For comparison, Walmart operates close to 200 active facilities with less than half the square footage.

The scale of Amazon’s network isn’t the issue as it would still have more warehouses than any company in America even if it halved its footprint. The real problem is what’s happening in those warehouses.

Known for its worker-productivity quotas, Amazon isn’t happy with the efficiency of its facilities. According to CFO Olsavsky, the massive marketplace overcorrected for its labor issues, going from understaffed to overstaffed in a matter of months. That reportedly tanked productivity.

“We hired more people and then found ourselves overstaffed when the omicron variant subsided rather quickly, at least from our standpoint in warehouses,” Olsavsky said. “So, the issue has switched from disruption to productivity losses to overcapacity on labor.”

Marc Wulfraat, president and founder of MWPVL, estimated reduced productivity due to overstaffing accounted for about a third of Amazon’s $6 billion worth of added costs in Q1. But that could be the least of the company’s problems. A leaked company memo, viewed by Recode in June, revealed the e-commerce giant could dry up its warehouse labor force by 2024.

“If we continue business as usual, Amazon will deplete the available labor supply in the U.S. network by 2024,” the memo warned.

If you’re wondering how that’s possible, consider Amazon’s unmatched turnover rate. A New York Times investigation uncovered that even before the pandemic, it was as high as 150%. That means there are more employees leaving Amazon warehouses each year than there are being hired.

In fact, there has been so much turnover that Amazon began tracking it weekly and found it loses an estimated 3% of its warehouse workers every seven days. That means the e-commerce powerhouse sifts through its entire supply of warehouse labor every eight months on average.

“It will take some time to iron out the wrinkles, but they will get through it,” he told Supply Chain Dive.

Amazon is dealing with some pretty massive wrinkles, so it will need to use an industrial-sized iron. Already, the company is shaking up its workforce with the addition of fully autonomous warehouse robots, the first of six “levers” it said it could pull to get it through a rough stretch, per the leaked memo. Scaling back warehouse production may be the second.