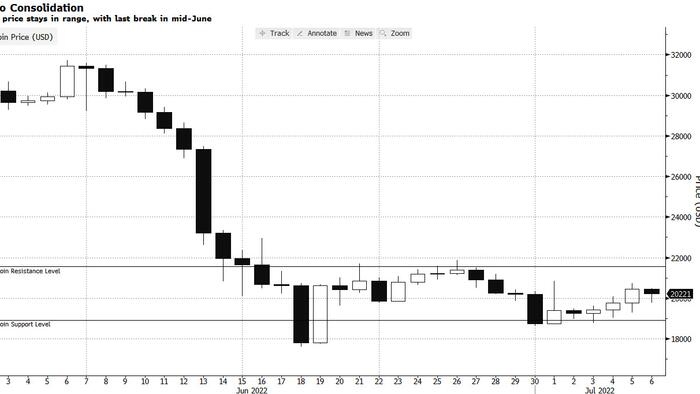 Investors Take Bitcoin Off Exchanges As Crypto Winter Settles In

As the crypto winter deepens, only the staunchest Bitcoin investors are still holding onto their tokens — but not on the exchanges.
Investors in the world’s biggest cryptocurrency are going into hibernation mode with on-chain activity dropping by 13% in early July from November’s highs — levels last seen in the bear phases of 2018 and 2019 when Bitcoin was worth less than $10,000 — according to a Glassnode analysis.

The risk-off market mood is spreading to the cryptocurrency exchanges as investors withdraw and stow their coins off-line in crypto wallets instead. The exchanges have seen their balances drop more than 20% from a Jan. 20 peak, according to Glassnode.

“Bitcoin has seen a near complete expulsion of market tourists, leaving the resolve of HODLers as the last line standing,” according to a Glassnode newsletter dated July 4. Bitcoin fell below $20,000 last month for the first time since 2020.

While several activity levels — a demand indicator — have trended downward in recent weeks, there still appears to be a stable holder base, as prices hover around $20,000. HODLers — stalwart investors who refuse to sell — are evident as Glassnode says relatively flat transaction activity shows continued Bitcoin consolidation.

Key levels to watch for Bitcoin are $18,910, a level that prices have dipped below twice in mid-June, and $21,557, around its late-June highs, according to Craig Johnson, chief market technician at Piper Sandler Companies.

“There’s no fundamentals for crypto, of course. It’s just purely price action,” Johnson said in an interview on Friday. “You’re just going to look at this and say, until you break out of that range — up or down — you are not going to make any conclusion that there’s a trend change yet. We’re just short-term consolidating in the context of a longer-term downtrend.”

The rout in Bitcoin has hit Coinbase Global Inc. the hardest as the exchange saw a drop of 450,000 Bitcoin over the last two years. Binance, which recently partnered with TikTok creator Khaby Lame and soccer star Cristiano Ronaldo, has seen an increase of 300,000 Bitcoin over the same timespan, making it the most popular Bitcoin exchange, per Glassnode and TXMC.

Recent breaks in operations, such as Coinflex’s and Vauld’s pause in withdrawals and CoinLoan’s reduction in withdrawal amounts, have decreased investor trust in exchanges. Illiquid supply increased by 223,000 Bitcoin in June as investors migrated funds to wallets from exchanges, according to Glassnode data. Of that 223,000, large-scale crypto holders made up much of that outflow from the exchanges as they withdrew over 140,000 tokens in June. These whales have been responsible for exchange outflows of almost 8.7 million, or over 40% of the global supply of Bitcoin.

“The Bitcoin bear is in full swing, and in its wake, the HODLers of last resort are the last ones standing,” Glassnode said.